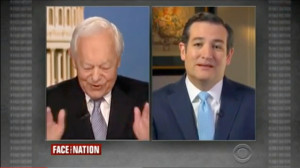 This week’s Glazov Gang was joined by Ann-Marie Murrell, the National Director of PolitiChicks.tv, Dwight Schultz, a Hollywood Actor, and Tommi Trudeau, the Producer of “Groovy Foods.”

The Gang gathered to discuss CBS Edits Out Cruz’s Criticism of Obama. The discussion occurred in Part I and analyzed the troubling and eerie workings of our “media.”

The episode also analyzed Lies of the State of the Union, Al-Qaeda’s Commands to Morsi, Malik Obama’s Terrorist Scarf, Hillary “Regrets” Benghazi and much, much more.