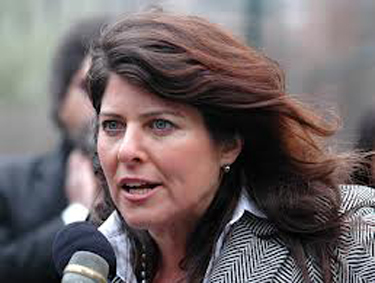 Naomi Wolf has joined the Hamas chorus by attacking feminist hero Phyllis Chesler for being a Zionist agent. How facilely Wolf has adopted the language of Jew-haters the world over — an even more bitter irony coming from someone who has written an entire book comparing democratic America to Nazi Germany.

And Chesler’s sin? To have dared to challenge the Left’s party line of defending the Islamic mutilators of adolescent girls, and practitioners of gender apartheid. But then again, this isn’t anything new for Wolf, seeing that she is on the record for finding the burqa sexy.

In her recent article, “Brandeis Feminists Fail the Historical Moment,” Phyllis Chesler criticized Brandeis’ phony feminists for their complicity in the University denying an honorary degree to Ayaan Hirsi Ali. In a response on her Facebook page, Wolf joined the anti-Semites of the Mearsheimer-Walt-Blumenthal set, claiming that Chesler has no mind of her own but is merely a puppet of the organized Jews:

“She is funded these days by pro-Israel advocacy organizations that support journalists and writers to advocate ‘the party line’ in terms of hardline anti-Islam and right-wing policy outcomes regarding Israel.”

This is pretty crude even for a brain-dead Marxist.

Wolf goes on to complain that Chesler:

“has made some outlandish, grossly factually incorrect attacks on me whenever I write anything that encourages Western readers to have a deeper understanding of Islam.”

What she means is a more groveling, supine attitude of appeasement towards barbaric Islamic attitudes and practices. When Wolf encourages people to have a “deeper understanding” of Islam, she is not alluding to caring more about the horrifying Islamic practices of female genital mutilation, honor killing, forced marriage, veiling and acid attacks carried out against Muslim women in the name of Islam.

“Naomi: Are you on the payroll of the public relations crisis management team Brandeis has reportedly hired? Are you now or have you ever been funded by George Soros? Or merely by the Democratic Party? Is Al Gore, for whom you once consulted, and who sold his cable channel to Al-Jazeera, backing you? Is he supporting your Woodhull Institute? Or are the Jordanian royals helping you? I know you visited with them and wrote about them very favorably.”

Wolf’s attack on Chesler is an extension of the collision that occurred between the two a few years back, after Wolf went on a political pilgrimage to the Muslim world and returned singing the praises of the burqa. Chesler dismantled Wolf’s embarrassing fairy tales of the female gulag that Islam has constructed for nearly a billion women with such precision that one wonders why Wolf is now even bothering to step back into this mismatch. Unlike Wolf, Chesler is a true scholar of Islam and as the former bride of a Muslim in Afghanistan, she has first-hand experience of the horrors of Islamic gender apartheid.

Naomi Wolf is a sad emblem of the pathetic state of the Left and of its pseudo feminist wing: ignorant, arrogant, bigoted, anti-Semitic, anti-American and an embarrassing fifth column for the Islamic barbarians of the Muslim Brotherhood and Hamas.

One thought on “Where Does Naomi Wolf’s Hypocrisy End, Or Does It?”