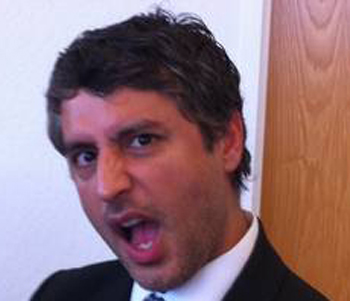 Frontpage Interview’s guest today is Pamela Geller, the President of the American Freedom Defense Initiative (AFDI), publisher of PamelaGeller.com and author of The Post-American Presidency: The Obama Administration’s War on America and Stop the Islamization of America: A Practical Guide to the Resistance. Follow her on Twitter here. Like her on Facebook here.

FP: I understand that the Muslim author Reza Aslan has said that he wanted to “make hate babies” with you. Can you please give us the details?

Geller: Jamie, it was on a Reddit thread. Reza was taking questions, and one Reddit user asked him: “Hello Reza, I have an excellent start up question for you. You and Pamela Geller are stuck on an island, what happens?”

Aslan answered: “Are we stuck forever? If so, then I guess it’s time to make some hate babies Pam.”

The person who asked the question, “benalmy,” was thrilled by this display of hatred and savagery, and wrote back: “oh dude you are awesome!” Another commented: “By expressing his ability to hate a woman and still wish to have sex with her, he becomes very relatable to reddit’s users.” And it was true: “scruba” wrote: “Reza, you’re my hero,” and “btn pshr” added: “omg this is amazing, I can’t even…” “Squishie 5413” wrote: “This is the best response I’ve ever seen.”

Only one commenter, “wanweilin,” at the very end of the thread, dared to challenge Aslan and state the obvious: “Sounds like rape. Appropriate for treatment for an infidel.”

We know there is a term for this: “hate-f**k.” And the Left has a field day with it to humiliate and slander conservative women. Vile.

When was the last time you heard a genuine pro-freedom writer fantasize about raping someone on the Left?

FP: You’re right, Pamela: imagine if a well-known male conservative said this about a liberal or Muslim woman, and then commentators chimed in to say how much they loved him for saying such a thing? The conservative’s career would be over and the comments would be used to show how “hateful” conservatives are.

Your thoughts on this double standard?

Geller: Jamie, the savagery and hate of the Left and Islamic supremacists (and Aslan is both) are off the charts, open and unapologetic, and still the enemedia claims that conservatives are the haters.

What’s amazing, and telling, about Reza Aslan is that he is such a mainstream media darling despite how hateful and vicious he is. After he shot to national attention last summer for boasting about degrees he didn’t have on Fox News, it came to light that he routinely berated his critics on Twitter with foul-mouthed abuse worthy of a schoolyard bully, not a respected analyst. The mainstream media took no notice, of course – and so here again is the double standard. If a conservative writer had been discovered to be speaking to people that way, he would have been denounced and ridiculed all the way out of the public square.

But none of that matters to the Left at all. One leftist group, Intersections International, which claims to promote “peacemaking” and “interfaith outreach,” actually honored Aslan “for his work at the intersection of religion, scholarship, and global peacemaking.” If anyone isn’t a peacemaker, it is this potty-mouthed creep. But for Intersections International and the entire Left, abusing and mocking conservatives even with the most repulsive language doesn’t mean he isn’t a wonderful person and even a “peacemaker.” As far as the Left is concerned, conservatives aren’t entitled even to the most basic human respect.

FP: Aslan also has ties to Islamic supremacists, doesn’t he?

Even more important than his foul mouth and disgusting rape fantasies is how closely he is aligned with jihadists and Islamic supremacists.

Here is a summary:

Reza Aslan is “a Board member of a lobbying group for the bloodthirsty and genocidally antisemitic Iranian regime. Aslan tried to pass off Iran’s genocidally-minded former President Mahmoud Ahmadinejad as a liberal reformer and has called on the U.S. Government to negotiate with Ahmadinejad himself, as well as with the jihad terror group Hamas. Aslan has even praised the jihad terror group Hizballah as ‘the most dynamic political and social organization in Lebanon,’ and has also praised the anti-Semitic, misogynist, Islamic supremacist Muslim Brotherhood, which is dedicated in its own words, according to a captured internal document, to ‘eliminating and destroying Western civilization from within.’ Aslan wrote: ‘The Muslim Brotherhood will have a significant role to play in post-Mubarak Egypt. And that is good thing.’ Millions of Egyptians obviously disagree. He has also applauded and called for the forcible shutdown of the free speech of those he hates — a quintessentially fascist impulse.”

FP: And this man is a hero of the Left.