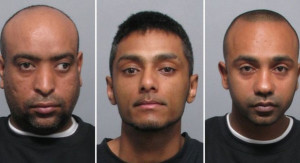 A horrifying news report in The Telegraph has just confirmed that 1,400 children were discovered as victims of Muslim rape gangs and prostitution rings in Rotherham, UK, while authorities and child protection services turned a blind eye in order to avoid being called “racist.”

Daniel Greenfield’s blog at The Point deals with this shameful and outrageous  story: “UK Police Arrested Parents Trying to Stop Muslims from Raping their Children.”

In response to the surfacing of this story, and to shed light on the dark forces that help make the vicious system of Islamic sex slavery possible in the West, Frontpage is re-running The Glazov Gang’s special 2-part series with Gavin Boby, of the Law and Freedom Foundation, about the terrifying reality of Muslim rape gangs in the UK and how the Left facilitates their barbaric crimes against helpless young girls. The series crystallizes why the horrible story emerging about the 1,400 child victims in Rotherham was a Muslim crime that the Left allowed to occur.

2 thoughts on “‘Easy Meat’: Inside the World of Muslim Rape Gangs — on The Glazov Gang”