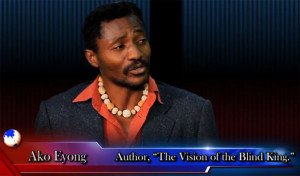 This week’s Glazov Gang was joined by Ako Eyong, a journalist from Cameroon, West Africa, where he became a political dissident and was eventually exiled for critiquing the government. He is the author of the new novel, The Vision of the Blind King.

Ako came on the show to discuss “A Cameroon Dissident’s Love Affair With America,” discussing his appreciation of living in the U.S., his new novel, the vital importance for a nation not to abandon God, the conflict between love and fear, and much, much more:

Don’t miss this week’s second episode with Conservative Entrepreneur Monty Morton, who came on the show to emphasize Two Lethal Threats to America: