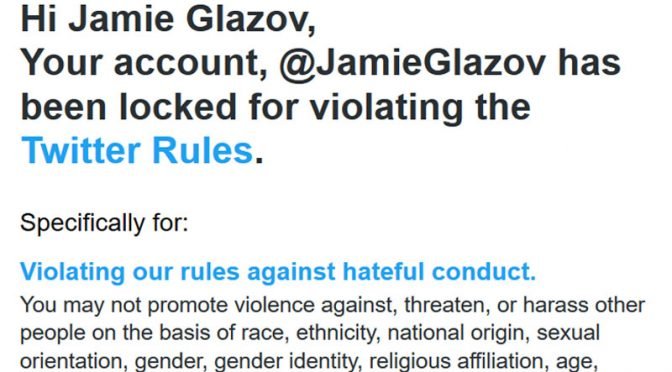 On Wednesday morning, May 2, 2018, at 6:12am, Twitter informed me that they had suspended my account. The reason they gave me was just as intriguing as Facebook banning me for my crime of reporting a Muslim’s physical threat against me. Twitter’s problem with me? Well, I had violated Twitter’s “rules against hateful conduct.” They write: 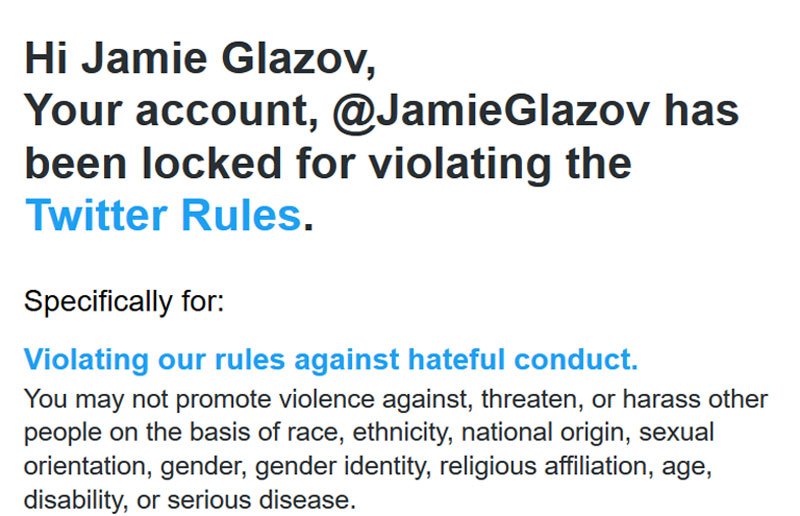 And what was my hateful conduct? It appears that quoting the Qur’an and Hadith now falls under that category.

Twitter tells me that two of my tweets “violate” their “rules” in this context. In one of the tweets, I quote Sahih Bukhari’s texts about Mohammed’s marriage to Aisha when she was 6-years-old and how he treated her. In the other tweet, I quote Qur’anic Suras that mandate the Hijab for women and sanction sex slavery. 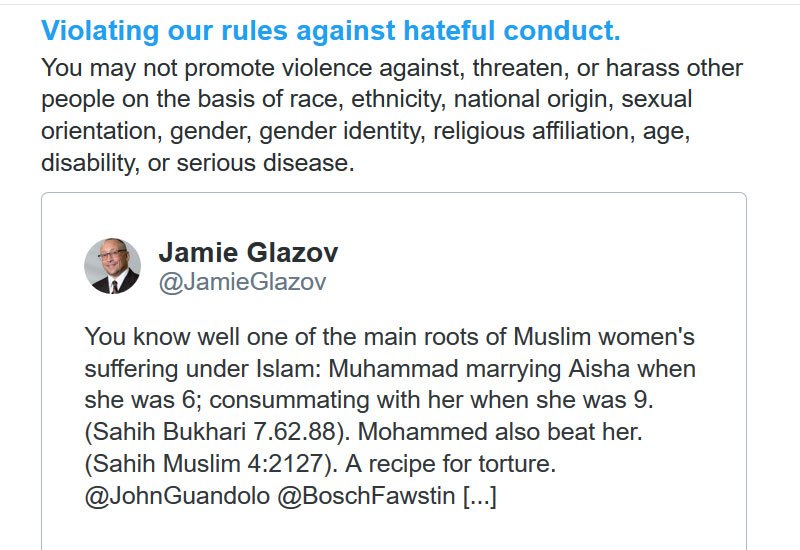 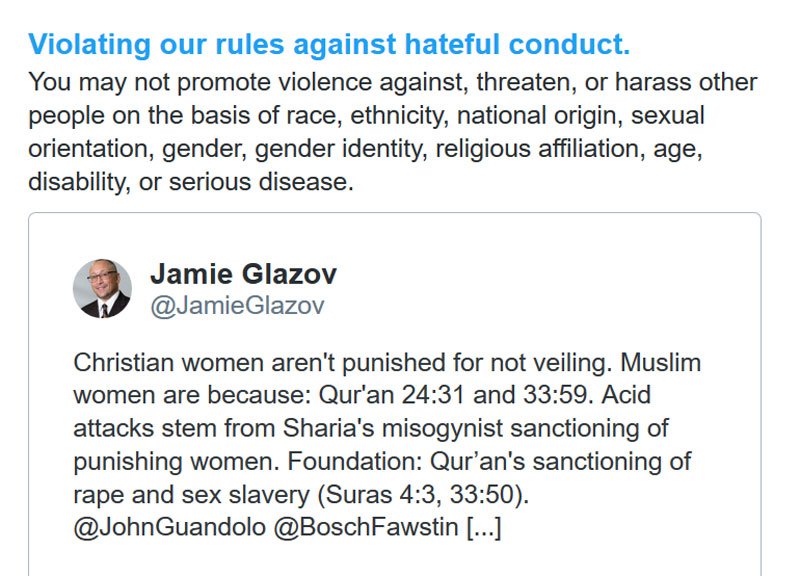 Twitter informed me that I could have my account back in 12 hours if I deleted these two rule-violating tweets. I did delete them. I felt a bit weird following their orders, as this meant deleting verses from Islamic texts — and surely such an act will hurt the sensibilities and rights of Muslims all over the world.

In deleting the tweets I was also  surrendering to Twitter’s totalitarian  suffocation of my free speech — and others’ free speech. But I did so, because I would like to get my Twitter account back so I can return to promoting freedom and, of course, to protest my suspension from Twitter on Twitter.

The mystery remains: how is quoting Islamic texts “hateful conduct”? Will Twitter soon be suspending Muslims’ accounts when their owners quote Islamic texts? They do so all the time.

Or do we have a situation in which kafirs (Islam’s dirty secret word for unbelievers) are the ones who are not allowed to quote Islamic texts, but Muslims are? If so, and that appears to be the case, then it means that Twitter has bowed to Islamic blasphemy laws.

This must explain why Tommy Robinson and Shazia Hobbs, two truth-tellers about Jihad and Sharia, are now permanently banned from Twitter – and why illustrator Bosch Fawstin, whose cartoons dare to depict the truths about Islamic Supremacism, was suspended from Twitter and had to fight to get his account back.

It also explains why Hamas enjoys a Twitter account, which links to its terrorist website that promotes genocide and is responsible for murdering thousands of people. It would do well to note that the U.S. State Dept. lists Hamas as a Foreign Terrorist Organization.

Is it legitimate to ask this question: Is Twitter’s providing of services to Hamas actually legal?

Or is asking such a question hateful conduct?

Suffice it to say that Twitter also provides the luxury of an account to two other recognized terrorist organizations: Al Aqsa TV (Hamas’ tv channel) and Hezbollah’s Al Manar TV.

Hamas and Hezbollah are, of course, just a handful of the many other Islamic terrorist organizations and supporters who get to have a voice on Twitter. Canary Mission, for example, has documented the calls for genocide on Twitter against Jews and endorsements of Hitler by student members of hate groups such as the Islamic Students for Justice in Palestine. Twitter has acted on this issue, of course, by suspending Canary Mission rather than the genocide-promoters that Canary unveils.

In terms of my own suspension on Twitter, I can’t help from wondering: How is standing up for Muslim women and girls who are persecuted under Sharia “hateful conduct”?

In the first tweet that I am being punished for, I stand up for the suffering Muslim girls throughout the Islamic world who are victimized by forced child marriage. Child marriage is a vicious and, tragically, prevalent phenomenon across the world — and organizations such as Human Rights Watch are valiantly trying to end it.

How can we ignore the millions of Muslim girls under Islamic law who are victims of this practice – which is enforced because Mohammed, who is considered in Islam to be the supreme example of conduct (Qur’an 33:21), married Aisha when she was 6 and consummated with her when she was 9? This fact is recorded in Islamic texts such as Sahih Bukhari — which I quote in the first tweet.

How can we protect and liberate Muslim girls if we do not talk about Qur’an 65:4, which sanctions marriage to pre-pubescent girls, stipulating that Islamic divorce procedures “shall apply to those who have not yet menstruated”? All of this is why Article 1041 of the Civil Code of the Islamic Republic of Iran states that girls can be engaged before the age of nine, and married at nine. It is why the Ayatollah Khomeini married a 10-year-old girl when he was 28 and why he referred to marriage to a prepubescent girl “a divine blessing,” and advised the faithful: “Do your best to ensure that your daughters do not see their first blood in your house.”

How can we turn our backs on millions of Muslim girls who are suffering this barbarity and many of whom are dying because their young bodies are not meant for sexual intercourse and child birth?

Isn’t it hateful conduct to turn our backs on this issue and to allow millions of Muslim girls to suffer? Of course we need to stand up for all girls, Muslim and non-Muslim alike, across the world who are the victims of the vicious and inhuman practice of child-marriage. But why must we ignore millions of Muslim girls and abandon them to their suffering?

In terms of my second tweet, I can’t help from wondering: How is standing up for the victims of sexual slavery, and for the Muslim and non-Muslim women who are killed, maimed and punished in myriad other ways for not wearing Hijab, “hateful conduct”?

Take the time to look at this gallery of Muslim women and girls who have been murdered in honor killings, disfigured in acid attacks and suffered other punishments, for not wearing the Hijab and for violating other Sharia rules. My tweet simply refers to the Qur’an’s verses that inspire and sanction these atrocities against women. The tweet refers to the Islamic mandate for the Hijab for women, which Sharia enforcers point to in order to justify punishing women for not covering properly.

Robert Spencer has documented many of the Muslim and non-Muslim women who have been killed for daring not to wear the Hijab. Many Muslim women and girls are at this moment being killed, imprisoned and tortured in Iran for taking off their Hijab.

How can we in good conscience ignore this suffering,  turn our backs on the victims and also blind ourselves to the teachings that inspire and sanction their victimization?

In my second tweet I also refer to the Qur’anic verses that sanction sex slavery. These are the teachings that ISIS Jihadists, for example, cite to their sex slaves when they justify what they are doing to them. How can we stop Islamic sex slavery and rescue its victims, like the Yazidi girls, if we are not honest about the Islamic texts that sanction Islamic sex slavery? Wouldn’t our callous indifference and silence constitute “hateful conduct”?

How can we ignore former child bride from Iran, Anni Cyrus, who now dares to tell her story of how she suffered under, and then escaped from, the cruel clutches of Sharia? Wouldn’t suffocating her voice constitute “hateful conduct”?

I am writing to Twitter to protest my suspension, as well as the suspension of other truth-tellers who dare to mention the roots of Jihad and Sharia. I will also be requesting an apology.

I will also be asking Twitter why Hamas, Hezbollah and other terror/hate groups are allowed on Twitter — while noble human-rights activists and freedom-defenders are banned.

Can you do the same please?

Please also share this article and make your voice known on Facebook and other social media outlets. If you are a columnist, reporter or any kind of media personality, please spread the word.

Let us stand up for the First Amendment and free speech. Let us stand up against Jihad and Sharia oppression. And let us not turn our backs to the millions of victims of that oppression — victims that include millions of young girls who are crying out to our human conscience and to our hearts.