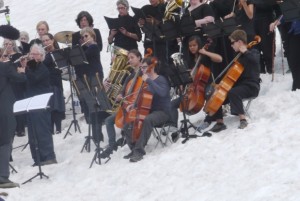 The Glazov Gangsters gathered to discuss Requiem for a Glacier. The discussion occurred in Part II and focused on how mental illness reigned supreme when a Global Warming orchestra recently played for a melting ice giant. [See Daniel Greenfield’s coverage of the event here].

In Part I, the Gang shed light on Obama’s ‘Phony’ Scandals.