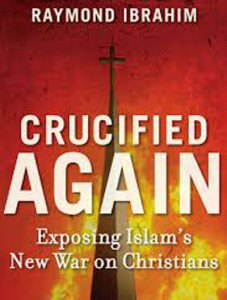 This week’s Glazov Gang was joined by Raymond Ibrahim, the Freedom Center’s Shillman Fellow and the author of the new book, “Crucified Again: Exposing Islam’s New War on Christians.”

Raymond shed light on Islam’s new war on Christians, the Brotherhood’s Church-burning sprees, its rape gangs, Obama’s complicity in the persecution of Christians, and Egyptians’ anger at Obama.

He also discussed the hypocrisy of Obama’s call for war against Assad, the Syrian rebels’ plans to annihilate Syria’s Christians, and the media’s cover-up of the whole Islamic war against Christians.

To watch the interview, see below.

Don’t miss the Glazov Gang’s second episode this week, featuring Colin Flaherty, the author of White Girl Bleed a Lot: The Return of Racial Violence and How the Media Ignore It.

Colin discussed the epidemic of black mob violence all over the country and the media’s cover-up of it.