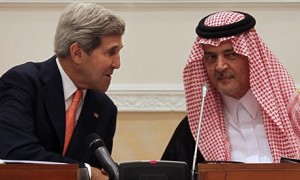 For instance, in the world of the Left, the West never has a right to say what is right or wrong — when dealing with an adversary culture and regime, that is.

If it’s Israel, you can start shooting right away.

For example, when it comes to Israelis getting out of line and engaging in monstrous behavior like building houses and apartments on their own territory, they must be denounced immediately for that — and pressured relentlessly to desist from such unconscionable behavior.

When Israelis have the audacity to imprison Palestinian terrorists who have massacred Israeli innocent civilians, something has to be done fast. And that’s why, on April 24, 2013, Secretary of State John Kerry and the Obama administration demanded that Israel release a number of Palestinian terrorists from its prisons — to make the Palestinian Authority happy of course. (P.S.: The P.A. was not pressured to stop its mosques, schools and media outlets from teaching that Israel has no right to exist or that Jews are descended from apes and pigs.)

If Kerry were asked what he thinks of apartheid-era South Africa, which Defense Secretary Chuck Hagel has compared Israel to, one just dares to presume that he would say it was a bad thing that blacks were considered second-class citizens — which of course it was. He would, in other words, apply a universal standard of human rights on South Africa and declare that a society that marginalizes and disempowers a certain group of people based on skin color is an inferior society and must civilize itself. And that would be a legitimate position.

But for a leftist, this attitude only applies, naturally, when one is dealing with cultures and regimes that are allied to the United States. If one is dealing with an adversary culture or religion, then that culture and religion automatically get a pass for all of their monstrosities.

And so, therefore, don’t hold your breath waiting to hear from John Kerry or Chuck Hagel – or from Obama and John Brennan — about their moral indignation about the Islamic-Arab slave trade of Black Africans going on to till this day in nations like Mauritania and Sudan. If you are a leftist, all of that doesn’t count or matter.

And so we arrive at quite an intriguing comment that Secretary of State John Kerry made on Monday in reference to Saudi gender apartheid, after meeting with Saudi King Abdullah to try to improve U.S.-Saudi relations:

When a reporter asked Kerry about whether Saudi women should be allowed to drive, Kerry responded that the debate was one “best left to Saudi Arabia.”

In other words, there is no universal standard of human rights when it comes to women’s rights, especially if we are dealing with Islam. So if a law arrived that said that Obama’s wife and two daughters were not allowed to drive, and that law was founded on Islamic theology, who are we to put up any resistance or make moralistic judgment calls? Right?

Yes, in the Left’s world, if women are being denied the right to an abortion in America, that is an outrage and must be condemned immediately. But if the genitals of young Muslim girls are being cut off with broken glass by the Islamic practice of female genital mutilation sanctioned by Islamic theology, and if Saudi girls are pushed back to their deaths into a blazing building by Saudi Arabia’s religious police because they are not Islamically covered, then that’s just other cultures practicing their own ways of life.

Who are we to judge?

And so, in Saudi society, when women are treated like they are less than animals – a misogynist practice inspired and sanctioned by Islamic theology – the Obama administration, due to its leftist idolatry, logically remains indifferent. Consequently, when dozens of courageous Saudi women protest for their right to drive by getting into their cars and driving — and risk vicious persecution for doing so – it is, according to John Kerry and the Left, none of our business, and not for us to take sides.

Interestingly enough, as TruthRevolt Editor-in-Chief Ben Shapiro reminds us: In 2011, Hillary Clinton condemned Israeli religious male soldiers leaving concerts at which women sang and the existence of gender-segregated buses in Israel — even though such buses exist only in ultra-religious communities. Shapiro crystallizes the leftist hypocrisy at play here:

“Lecturing a democracy like Israel is liberalism. Lecturing a sexist monarchy like Saudi Arabia is imperialism, according to the Obama administration.”

Shillman Fellow Daniel Greenfield, meanwhile, succinctly capsulizes the tragic and shameless place that America now finds itself in with the Left in charge:

“The nation that once stood up to Communism now boasts of a Secretary of State who can’t say whether women should be allowed to drive.”

Get it straight: When Muslim girls are murdered in honor killings and disfigured in acid attacks, don’t be racist and judgmental about another benign way of life.

But when it comes to the Republican War on Women in America, and a woman finds herself purchasing a condom out-of-pocket, without the government’s funding, that’s when you get furious, indignant and judgmental — and scream about women’s rights!

The Left’s utopia is almost here, my friends. Be patient. Just give it a little bit more time.

Don’t miss Josh Brewster‘s video interview with Jamie Glazov about why the Left abandons victims of Islamic terror and gender apartheid in the two-part series below: