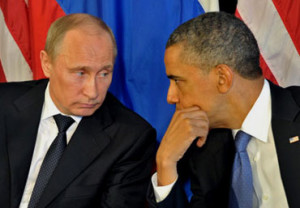 Prof. Melcuk joined the Gang to discuss Putin’s Contempt For Obama. The discussion occurred in the context of Putin’s Ukraine Gamble. Prof. Melcuk explained what Putin is really after, who and what he really fears, and why he laughs in the Radical-in-Chief’s face:

Don’t miss this week’s other BLOCKBUSTER episode with Daniel Greenfield, a Shillman Journalism Fellow at the Freedom Center who runs the blog The Point at Frontpagemag.com.

Daniel joined the Gang to discuss Why Lois Lerner Pleaded the Fifth, Obama’s Belief that Abbas is a Peace Angel, Obama’s Helplessness Over the Ukraine, and much, much more: