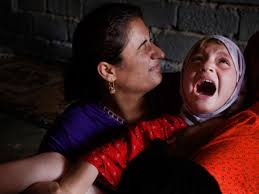 Last Tuesday, on April 8, Brandeis University rescinded its invitation to human rights activist Ayaan Hirsi Ali to receive an honorary degree from the institution. Brandeis caved in the face of intimidation from CAIR and other Muslim Brotherhood front groups, as well as a student petition on Change.org and a faculty petition – the contents of which have now become known.

The faculty petition is a textbook case of leftist pathology and of how “progressives” demonize true heroic freedom fighters and push millions of victims of totalitarian regimes and ideologies into invisibility for the sake of their own egotistical and destructive agendas.

A case in point in this ugly leftist narrative is how the signatories of the Brandeis petition have succeeded in banning a woman from their university who is the victim of female genital mutilation (FGM), suffered under an Islamic knife because of Islamic doctrine. Ali represents millions of Muslim females — mutilated and mutilated-to-be. And yet the signatories of the petition are callously indifferent, because they have their progressive program to attend to and fulfill.

The Brandeis faculty petition, written on April 6 and addressed to President Lawrence, stresses “the horrible message” that inviting Ali to the university “sends to the Muslim and non-Muslim communities at Brandeis and beyond” because of Ali’s “virulently anti-Muslim public statements.” Aside from complaining about Ali’s truth-telling about Islam, the petition also issues a dire warning about the “unnecessary controversy” that the human rights activist’s presence would bring to the campus.

To be sure, who needs nightmarish scenarios like debate and intellectual diversity when the Marxist Left has already lovingly bestowed the peaceful Party Line?

The petition then references the major issues with which Ali is concerned: female genital mutilation, forced marriages, and honor killings. “These phenomena,” the petition flippantly notes, are not “exclusive to Islam.” This is a standard and perpetual tactic of obfuscation and equivocation employed by the Left whenever a monstrous evil is labelled in a totalitarian enemy. It serves as an excuse for inaction by presupposing that if a crime is committed by someone else, somewhere else, that it somehow justifies doing and saying nothing in the face of a crime being perpetrated on a mass scale right before our eyes – and one that we can do something about.

In other words, the sordid logic implies that if a sin or an injustice exist somewhere else on the planet, then one must never fight for — or defend the victims of — any one ideology or system (unless it is of the Western variety, of course).

Thus, if one dares to show concern for the millions of Muslim girls who are victims of female genital mutilation, the leftist will reflexively retort: “Muslims are not the only group that practice FGM.” But so what? The bottom line is that Muslims are the principal religious group that practices this sexual violence against women. And if a young girl is a victim of FGM, the chances are that she lives in a Muslim household and in a Muslim culture. And this barbarity is kept alive and legitimized by Islamic theology.

The faculty petition to President Lawrence also expresses a deep concern about the fact that Ali has suggested “that violence toward girls and women is particular to Islam or the Two-Thirds World.” This is intolerable (even though completely true) because, according to the petition, it obscures “such violence in our midst among non-Muslims, including on our own campus.”

This is another consistent tactic that the Left engages in to insert its falsehoods into dialogues about oppressed people under monstrous tyrannies. The plain fact staring everyone in the face is that while violence may exist among non-Muslims, their laws and institutions delegitimize and illegalize such conduct. For instance, if a non-Muslim anywhere in the United States, including on a university campus, engages in violence against a woman and the police are called, he will be charged. In Islam, violence against women is inspired and sanctioned by the institutions themselves, precisely because misogyny, including wife beating, is embedded in the Qur’an.

Consequently, in terms of female genital mutilation, millions of Muslim girls are victims of this horrifying crime precisely because it is fundamentally Islamic and is integral to Islam’s misogynist structures.  It is rooted in Islamic texts such as Umdat al-Salik:

“Circumcision is obligatory (O: for both men and women. For men it consists of removing the prepuce from the penis, and for women, removing the prepuce (Ar. Bazr) of the clitoris.” Sacred Islamic Reliance: page 59, Umdat al-Salik  (“Reliance of the Traveler”), a manual of the Shafi’i school of Islamic jurisprudence, endorsed by Egypt’s very own Al-Azhar University of Cairo — the oldest and most prestigious university in the Islamic world.

This explains why one of Sunni Islam’s “Four Great Imams,” Ahmad ibn Hanbal, quotes Muhammed as saying: “Circumcision is a law for men and a preservation of honor for women?” It is no shock, therefore, that Sheikh Muhammad Sayyed Tantawi of Egypt’s Al-Azhar University has called circumcision “a laudable practice that did honor to women.”

As a result, in Muslim Egypt, like in Indonesia, the crime of FGM is perpetrated on a massive scale because of Islam. Even when the Egyptian government tried to ban FGM back in 1996, an Egyptian court overturned the ban in July 1997 because of the ferocious uprising it sparked among Islamic clerics, who fervently pointed to Islamic teachings to make sure this crime against women remained firmly in place.

The road to saving millions of Muslim girls from this vicious and barbaric Islamic crime is to do what Ayaan Hirsi Ali is bravely doing, and what the signatories of the Brandeis faculty petition are trying to stop her from doing: to isolate and pinpoint Islam as the main culprit in this context.

And so, this recent shameless story of the faculty petition at Brandeis causing the disinvitation of Hirsi Ali is yet another tragic reminder of Islamic cruelty to women and our own culture’s shameful surrender to it. The signatories of the Brandeis faculty petition conclude that they,

In other words, multiculturalism must trump women’s rights. As I have documented in United in Hate: The Left’s Romance With Tyranny and Terror, the Left cannot reach its hand out in compassion and solidarity to the suffering people under Islam, or under any other tyranny, because doing so would be an admission of the evil of an adversary culture and ideology. Doing so would cast a spotlight on the superiority and goodness of Western civilization, and therefore serve as a reminder of the importance of protecting and saving it. For the Left, such a concept is nightmarish and anathema, because the entire purpose of the Left is to revile and destroy its own host society.

For progressives to admit the dark realities of Islamic jihad and Islamic gender apartheid is to jeopardize their entire cause, identities, social belongings, cultural and material rewards, and their narcissistic cravings for approval and admiration in their “progressive” milieus.

The suffering of millions of Muslim women, therefore, must be ignored. And Ayaan Hirsi Ali must be dehumanized and silenced.

This whole sad and tragic issue is ultimately reduced to one basic question that should be asked of all the signatories of the faculty petition to President Lawrence:

Theoretically, if you could take time back and save Ayaan Hirsi Ali from female genital mutilation, and in so doing, you would end up saving all the Muslim female victims of genital mutilation, would you do it? All you have to do is name Islam as the cause of this crime, concede that it is a violent religion, and admit that your own host society and civilization are superior.

The obvious answer we would get from the signatories to this question unveils the true nature of the leftist agenda; it exposes what the leftist narrative really is: a long frightening horror story of human blood sacrificed on the altar of utopian ideals.

To get the whole story on why the Left reaches out in solidarity to Islamo-fascists and ignores their victims, watch Jamie Glazov discuss Jihad-Denial in the 2-part video series below:

One thought on “Brandeis, Female Mutilation and the Falsehoods of a Faculty Petition”