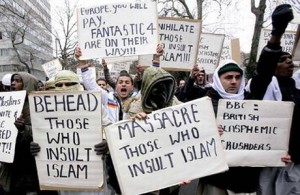 This article is written by Drew Zahn and reprinted from WND.com.

Jamie Glazov of FrontPage Magazine, author of “United in Hate” and “Showdown with Evil,” is tired of being called “racist” or an “Islamophobe” for speaking out against the danger Islam poses to both Westerners and Muslims alike.

As WND reported, Glazov appeared last month in a panel discussion on Sean Hannity’s Fox News Channel program, in which fellow panel member Tamara Holder blasted Glazov as “a disgusting person” for claiming those who deny Islam’s role in jihad are complicit in perpetuating jihadist terror.

Video of the exchanges on “Hannity” can be seen below. Glazov defends Pamela Geller and Brigitte Gabriel at the 11:45 mark and confronts Muslim commentator Mike Ghouse on whether Islam is a problem at the 32:00 mark:

That kind of attack – labeling the champion of victims as the perpetrator instead – is exactly how the left operates, Glazov now explains.

In a follow-up interview with Ann-Marie Murrell, a WND columnist and author of the upcoming book “What Women (Really) Want,” on his own “The Glazov Gang” program, Glazov contends the left is winning the culture war, in part, because of its effective strategy of “demonizing” those who tell the truth about Islam.

“So many people are afraid to come forward because they’re called ‘dangerous’ people,” Glazov said on “Hannity.” “They’re called ‘racists, Islamophobes.’ But we’re the ones on the side of the victims, including Muslims.”

In his interview with Murrell, he elaborated: “What I’m so tired of hearing and what I was saying on the show is how the left has constructed the boundaries of debate. … [We’re] standing up for the victims of jihad and Islamic gender apartheid, and this means we’re also standing up for many Muslim victims, for many Muslim people. Do you think we’re ‘Islamophobes’ and ‘racists’ because we spend so much of our time trying to save and protect the victims? … Those are Muslim women, those are Muslim girls.”

Glazov pointed to the example of Islam critic Pamela Geller, who sought to build a memorial grove for Aqsa Parvez, a 16-year-old girl from Ontario, Canada, who was killed by her Muslim father and brother for refusing to wear a hijab covering. Geller has been repeatedly condemned as “racist” and “Islamophobic,” and her bus ads in Edmonton offering help to other Muslim girls in danger of honor killing were pulled down by the city, after officials accused Geller of looking to “demean and degrade people of Islamic faith.”

“When Pamela was trying to bring a memory to that Muslim girl and all the millions of Muslim girls that Aqsa represents in terms of the suffering under Islamic gender apartheid, she was called the racist, she was called the Islamophobe,” Glazov pointed out. “This is how it’s working, and this is what we’re trying to fight against because the left has built these parameters of debate.”

“[But] now, if you have a problem with Islam, you ‘hate Muslims’ – this is how they’ve constructed this, and this is what happened on the [Hannity] show,” Glazov added.

Murrell played some of the Hannity show confrontation over Islam.

“That clip was epic,” said Murrell. “This episode of Sean Hannity was one of the best ever in the history of Fox News. … It was one of the most important for sure.

Murrell also talked with Glazov about those commentators, like some he faced on the “Hannity” panel, who assert Islam is innocent of jihadist killings, the fault instead lying with only a few, bad “radicals” within the Islamic faith. She asked Glazov whether such pundits are truly ignorant of Islam’s fomenting of terror, or whether they realize it and feign innocence anyway.

“That’s the question of our time,” answered Glazov, arguing there are different “brands” of Islam apologists on the political left. “There’s the leftist who knows exactly what he’s doing [like President Obama]. This is a deliberate destruction that they’re perpetrating. Also on the left, there are the people who aren’t so much conscious of what they’re doing; they’re complicit, they’re part of this destructive movement, but they operate out of fear. … Deep down, they are afraid to, No. 1, accept the truth.”

Glazov said it’s easy to accept the idea that there’s only a minority of Muslims who have perverted the teaching of Islam, “but the real reality and the darker horrifying reality just may be that there’s something in the Quran and in the hadiths and in the Islamic religion which inspires and sanctions jihad. And if that’s the issue, then we’re facing quite a threat, and we’re facing quite a conflict and a confrontation eventually. For many people this is too terrifying and depressing to accept, so they’d rather put their head in the sand and demonize the messengers and the truth-tellers rather than confront the threat.”

Glazov also said despite the flared tempers on the “Hannity” panel, he didn’t regret his “passion” for the subject.

“I’m upset that there’s a genocide being perpetrated against Christians throughout the world,” Glazov said. “I’m upset that three Israeli teenagers, for instance, were just kidnapped by Hamas and murdered and yet the whole world is still blaming Israel instead of pointing their finger at [the] Palestinian death cult.”

For Glazov, the news out of Israel is just one more proof for his point that apologists for Islam and their friends on the left would rather “demonize” critics of Islam than face just how dangerous Islam may be.