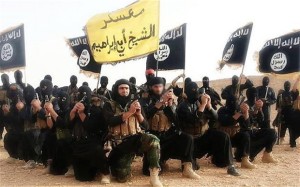 This week’s special guest on The Glazov Gang was Raymond Ibrahim, a Shillman Journalism Fellow at the David Horowitz Freedom Center, a Middle East and Islam specialist, and the author of Crucified Again: Exposing Islam’s New War on Christians (2013) and The Al Qaeda Reader (2007).

He joined the Gang to discuss ISIS’s Islamic Inspirations, explaining how the jihadist terror we see in Iraq today, and throughout the world, is founded on Islamic theology. Raymond also discussed Jamie’s Battle on Hannity against the Unholy Alliance, Jihad Denial, Obama’s Enabling of Jihad, Jihadi Foreign Travelers, and much, much more:

Don’t miss this week’s second episode with Daniel Greenfield, a Shillman Journalism Fellow at the David Horowitz Freedom Center who writes the blog, The Point, at Frontpagemag.com.

Daniel discussed The Invasion on Our Southern Border, unveiling the horror of Obama’s border disaster. He also discussed Israel vs. Hamas, Obama’s Iraq Throwaway, Hillary’s Rape Defense Lies, and much, much more: