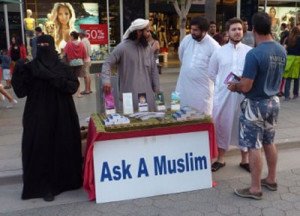 This week’s Glazov Gang was guest-hosted by Nonie Darwish and joined by Samira Tamer, L.A. ACT Chapter Leader, who joined the show to discuss Hijab Rising on Santa Monica’s 3rd Street Promenade, shedding a disturbing light on Islamic Supremacism’s totalitarian presence on the streets of L.A.:

Don’t miss this week’s second Glazov Gang episode with Dr. Jim Tolle, the Senior Pastor at El Camino Metro Church in Los Angeles. Pastor Tolle joined the show to discuss The Notion of “Sin” in Islam and Christianity, analyzing how the stark contrast in two religions’ values fosters peace and forgiveness in one — and violence and killing in the other: