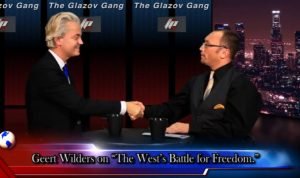 This week’s special episode of The Glazov Gang was joined by Geert Wilders, the founder and leader of the “Party for Freedom” — which is currently the fourth-largest party in the Dutch parliament. Mr. Wilders is best known for his brave stance against, and truth-telling about, Islam. He is the author of Marked for Death: Islam’s War Against the West and Me.

He came on the program to crystallize the only way the West will be able to preserve itself.