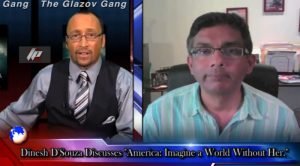 [Donate to The Glazov Gang through Pay Pal or its Kickstarter campaign.]

Only two days ago we started a Kickstarter campaign to raise $3,000 just to stay on the air. Because of your AWESOME love, support and appreciation of the value of the show, we have already reached that goal! To you, our fans and supporters, we are eternally grateful.

We are now back on our feet. But we need to raise $30,000 in total to keep the show up and running for a year. With the incredible help and generosity we have just received to bring us back to life, we are very optimistic that this goal can be reached!

Supporters can now donate directly to The Glazov Gang‘s PayPal account and also to our Kickstarter campaign.

And during this time, and with your ongoing support, we are building our viewer market and advertising vehicles to solidify our base so that The Glazov Gang will be a force to be reckoned with for a long time to come!

Please make a donation of whatever amount you can so that The Glazov Gang can continue to get the message of warning out that the Left and Muslim Brotherhood front groups are disallowing our media and culture to even whisper about or contemplate.

It is a message that the general public craves.

A donation to keep The Glazov Gang fighting for our liberties in the trenches will be so cherished and appreciated. Help us to defend America, the free world, Israel and the Christian, Jewish and other infidel peoples.

Thank you in advance for your continued support.

Donate to The Glazov Gang through Pay Pal or its Kickstarter campaign.

In the meanwhile, please subscribe to the Glazov Gang’s YouTube Channel and encourage all of your friends to do the same. It is very much appreciated!

And don’t miss the BLOCKBUSTER episode with Dinesh D’Souza, which won (in a tie with the Geert Wilders episode) the Glazov Gang’s 2014 Episode of The Year Award: