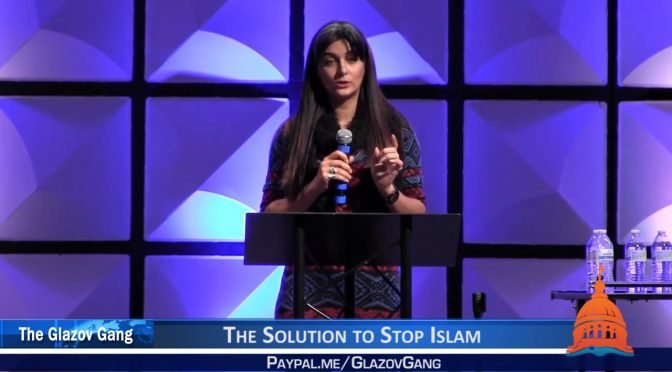 Recently, The Glazov Gang ran a stirring speech by our very own Anni Cyrus — that she recently delivered in Chicago at the Illinois Family Institute’s “The Danger of Islam” seminar. Anni revealed The Solution to Stop Islam and unveiled a powerful and humanistic plan.

The video has gone viral and has received a massive response, which  includes much praise.  The video has also, unsurprisingly, triggered a lot of seething rage and anger from a certain segment of Islam’s followers. But, once again, it appears that to expect a rational and intellectual discourse from them is too much to ask for.

We encourage our viewers to click on the YouTube video of Anni’s speech below, and to go to its comment section underneath. Take the time to conduct a careful study of the comments directed at Anni from Islam’s followers. Focus on the manner of argumentation that they employ to counter Anni’s main thesis — which is based on her own life experience and her careful and meticulous study of Islamic texts.

We had to delete many comments for obvious reasons, but the ones remaining give a good indication of the main style of debate by the “critics”.

And we can’t help from asking: what do this manner and level of argumentation by Anni’s Muslim haters reveal about Islam?

5 thoughts on “Muslims’ Verbal Abuse of a Sharia Survivor”