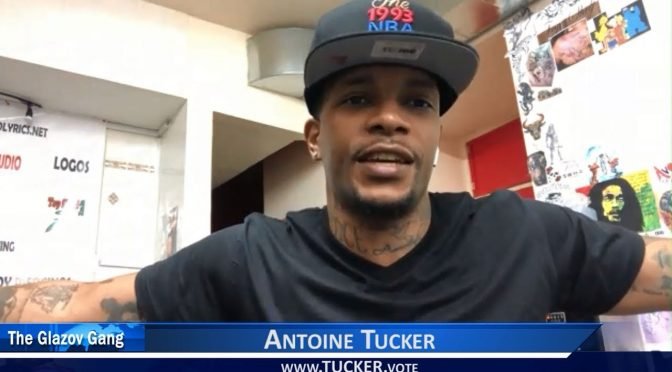 This new Glazov Gang edition features Antoine Tucker, an anti-globalist activist who is running for Congress in NY14 against Alexandria Ocasio-Cortez. Visit his site at Tucker.vote and on Instagram and Twitter: @montaga.

Antoine unveils Sharpton’s Pathetic Perm, shedding a disturbing light on an anti-white racist who has had a white man’s hair-style for 30 years.

Also make sure to watch Antoine proclaim: ‘Sharpton, You’re a Snitch and a Con Man,’ where he exposes the truth behind the ‘Reverend” and ‘Civil Rights Leader’.

Antoine also reveals the true reason why the Left hates Trump, why and how it injures and enslaves the people it pretends it seeks to protect, why it is waging a war on humans’ souls — and much, much more.

It is the blockbuster interview from which the above clip is taken:

Also tune into Jermain Botsio, the founder of Conservative Nation, and Will Johnson, the founder and president of UniteAmericaFirst.com, discuss Henry Davis’ video, in which he proclaims: “I Ain’t Never Been a Mo–f–in Slave!” Jermain and Will reflect on how leftists are in panic mode as American blacks flee the Democratic plantation: