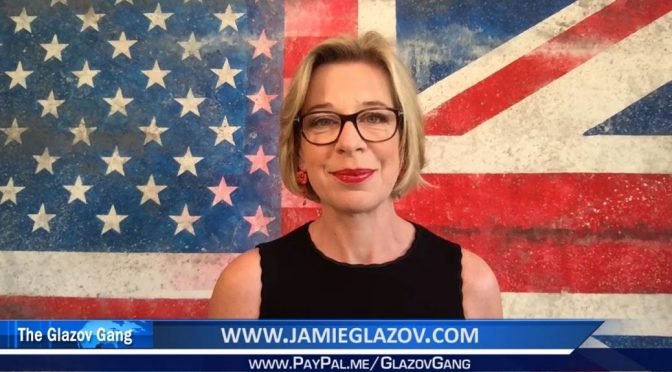 YouTube continues to enforce its totalitarian Deep State obligations diligently. It appears that a recent Katie Hopkins video, produced by a David Horowitz Freedom Center–Glazov Gang collaboration and uploaded to the Glazov Gang channel on April 22, 2020, simply contained too much truth for the Google-owned video platform to handle. YouTube took the video down, stating that it “has been removed for violating YouTube’s Terms of Service.”  How exactly anything Katie said violated YouTube’s “Terms of Service” YouTube did not explain.

Katie’s video saw U.K.’s valiant freedom fighter unveil Life Under Lockdown in the U.K., where she shed a sober and telling light on The Good, the Bad and the Ugly. Katie discussed the dire consequences of socialized medicare under the Covid-19 crisis, the effects of Prime Minister Boris Johnson’s handling of the “pandemic”, the lockdown’s consequences on the British economy and on British citizens, and much more. Katie discussed all of these issues in a civilized, factual and scholarly manner. And yet her video was still removed.

We reached out to Katie on her thoughts about YouTube’s removal of her video, and she commented:

The most shameful part of the removing of my video is it assumes people are too stupid to be trusted to form their own opinion. @YouTube is saying you are too thick to think for yourselves.

This development is, of course, not much of a surprise, seeing that YouTube is consistently censoring speech that goes against the globalist/leftist agenda. YouTube, for instance, perpetually censors PragerU videos and just recently took down a video of two doctors (Dan Erickson and Artin Massihi) from Bakersfield, California, who held a press conference calling for the reopening of the country. The doctors had dared to argue that Covid-19 is less deadly than is being reported — or has been anticipated.

For the Glazov Gang, this treatment by YouTube also comes as no surprise — as it has had other videos removed, its channel is consistently demonetized and its subscribers are constantly removed.

The Glazov Gang has contacted YouTube requesting a more detailed explanation of how exactly Katie’s video violates YouTube’s “Terms of Service”. No response as yet.

Make no mistake: This as an attack on free speech. And myriad videos made by various figures are being removed because, as YouTube’s CEO Susan Wojcicki has stated, anything that violates WHO guidelines on the “pandemic” will get taken down. And it is very clear, by this point, who and what WHO is.

Please join the battle on behalf of free speech: Spread this news about YouTube’s censoring of the Glazov Gang’s Katie Hopkins video, Life Under Lockdown in the UK. Also contact YouTube and ask them why exactly they removed Katie’s video. Tweet them at @YouTube.

Thank you. It is greatly appreciated.