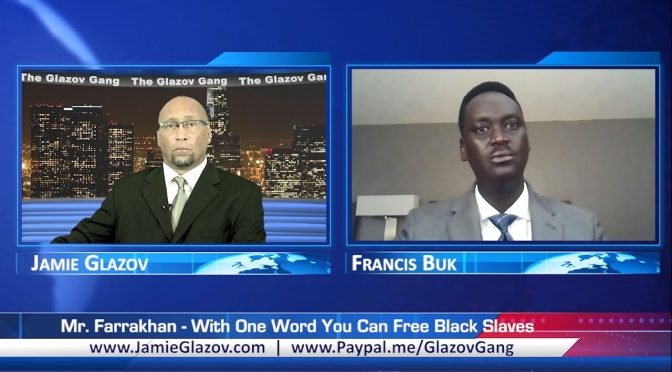 [To get the whole story on why the Left betrays those who it pretends to speak and care for, read Jamie Glazov’s United in Hate: The Left’s Romance with Tyranny and Terror: CLICK HERE.]

This new Glazov Gang episode features Francis Buk, a former slave in Sudan who escaped his enslavement and is now an abolitionist. (Read his memoir Escape from Slavery and help him to free modern-day slaves by supporting iabolish.org.)

Francis affirms: Mr. Farrakhan – With One Word You Can Free Black Slaves, unveiling how Farrakhan won’t say a word, and he will continue to allow black people to be auctioned for slavery in Africa.

And make sure to watch our 3-Part-Series on Racist Muslim Arabs Barbarizing Black Slaves in Africa and Farrakhan’s Betrayal of Black Slaves:

Part 1: Dr. Charles Jacobs: Farrakhan’s Betrayal of Black Slaves – how the Nation of Islam leader has turned his back on black Africans being sold as chattel.

2: Francis Buk: ‘My Escape From Slavery in Sudan’ – The horrific story of an African boy’s ten years in captivity.