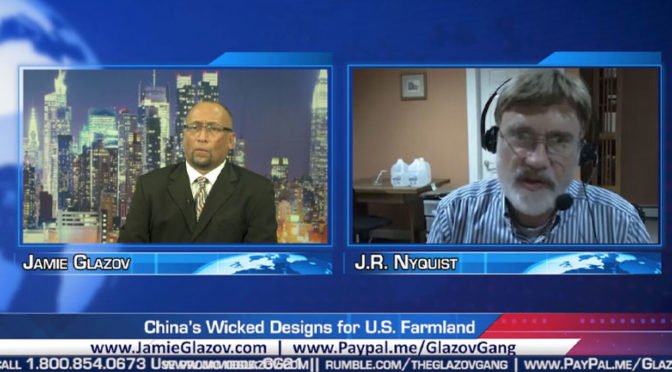 [Show your support for Mike Lindell and The Glazov Gang by using this link for MyPillow and save up to 65% on all your purchases!]

Follow us on our Rumble Channel and on JamieGlazov.com, GETTR: @jglazov, Parler: @Jamieglazov11, Gab: @jglazov and Facebook.

This new episode of The Glazov Gang features J.R. Nyquist, an expert in geopolitics and the history of communism. He is author of many books, including his latest: The Fool and His Enemy. Visit his website at jrnyquist.blog.

Jeff discusses China’s Wicked Designs for U.S. Farmland, reflecting on A communist regime’s malicious plan to deal with its own overpopulation.

And make sure to watch our special 8-Part Series on Leaked Audio Exposes China’s War Plan to Invade U.S. and Joe Biden: Russian-Chinese Agent in the White House?

[3] Clare Lopez: China: Licking its Chops? Is the CCP sitting on the sidelines and waiting to pounce?

[4] Trevor Loudon: Joe Biden: Russian-Chinese Agent in the White House? — The traitor behind the mask.

[8] John O’Neill and Sarah C. Wynne: China’s Cyberattack on ‘The Dancer and the Devil’ – A communist regime’s surreal attempt to make a book disappear.