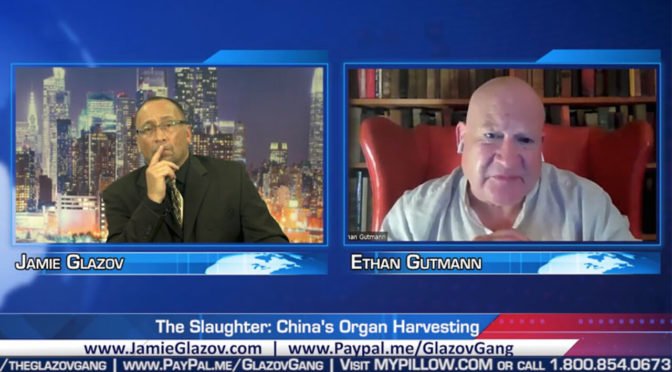 [Show your support for Mike Lindell and The Glazov Gang by using this link for MyPillow and save up to 65% on all your purchases!]

Follow us on our Rumble Channel and on JamieGlazov.com, GETTR: @jglazov, Parler: @Jamieglazov11, Gab: @jglazov and Facebook.

This new episode of The Glazov Gang features Ethan Gutmann, an award-winning China analyst and human-rights investigator who has been nominated for the Nobel Peace Prize. He is the author of The Slaughter: Mass Killings, Organ Harvesting, and China’s Secret Solution to Its Dissident Problem. Please help the cause at Victims of Communism Memorial Foundation.

Ethan discusses The Slaughter – China’s Organ Harvesting, taking us into the horrifying world of Marxist profit and butchery . . . and sadism.

And make sure to watch our special 9-Part Series on Leaked Audio Exposes China’s War Plan to Invade U.S. and Joe Biden: Russian-Chinese Agent in the White House?

[1] J.R. Nyquist: China’s Wicked Designs for U.S. Farmland – A communist regime’s malicious plan to deal with its own overpopulation.

[4] Clare Lopez: China: Licking its Chops? Is the CCP sitting on the sidelines and waiting to pounce?

[5] Trevor Loudon: Joe Biden: Russian-Chinese Agent in the White House? — The traitor behind the mask.

[9] John O’Neill and Sarah C. Wynne: China’s Cyberattack on ‘The Dancer and the Devil’ – A communist regime’s surreal attempt to make a book disappear.