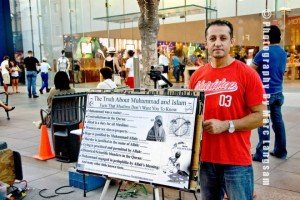 This article is written by Prissy Holly and reprinted from madworldnews.com.

While some continue to believe the false narrative that Islam is a religion of peace and condemn those who speak the truth as being either “bigots” or having a case of “Islamophobia,” one group has decided to take the streets of America to expose this “religion” to all who will hear.

The group called the Counter Jihad Coalition is spreading their message to proclaim their message to shoppers, taking quotes straight from the Qur’an to expose the religion’s violent teachings and radical agenda. One of the locations this group frequents is the shopping center known as the Promenade in downtown Los Angeles, which is a very popular shopping location for Muslims in the area, where men with full beards and hijab-wearing women are often seen.

Dr. Jamie Glazov is one of the warriors who spends many of his weekends at the Promenade in order to expose Islam and bring attention to the Counter Jihad Coalition’s work. The following video features one of Glazov’s videos from his website called The Glazov Gang. The video shows a clip of Louis Lionheart of TruthDefenders.com, who works alongside the Counter Jihad Coalition, and things quickly become violent after one Muslim isn’t too amused by his message.

At minute-mark 4:46, you can see it become violent:

As Louis Lionheart takes to the streets, you can see him physically attacked by a Muslim woman, after he tells the crowd how Mohammed was a pedophile who married a little girl (Aisha) who was just 9-years-old.

I commend these brave individuals. If we do not bring attention to Islam and the true intentions that these Muslims have for taking over our the entire globe, how will we ever be able to prepare ourselves to fight their radical agenda which is infiltrating every facet of our government agencies and our nation’s leadership?